How to monitor IP routing to the cloud

Many enterprises have adopted cloud-based services over the last decade. Cloud computing allows these organizations to run their high-traffic, high-performance applications on low-cost IT infrastructure, taking advantage of server virtualization and the scalability of today’s data centers. This helps enterprises improve their operational efficiency while keeping costs down.

Restoring Visibility into the Cloud with Route Analytics White Paper

While there has been ample focus on monitoring and managing cloud applications, systems, storage, and security, most enterprises don’t monitor IP routing to the cloud. That leaves them susceptible to cloud connectivity issues.

Why monitor IP routing to the cloud?
Because cloud applications reside outside the actual enterprise premises, IP routing between the enterprise and the cloud infrastructure over public IP networks is essential.

To ensure high availability, enterprises have redundant links between the different nodes in their networks and to their multiple service providers. This creates numerous paths between one node to another, either within the network or outside. But the dynamic nature of IP routing—where routing paths are automatically chosen in milliseconds based on the present state of the network—makes it extremely difficult for network engineers to understand what is happening in the network.

Things get even more complex when traffic exits the enterprise network and traverses the Internet. With Internet routing, traffic can pass through different autonomous systems, thousands of network addresses, and myriad paths before it reaches its destination. Here, numerous factors—such as changes in routing paths, BGP peering failure, route leaks, and more—can result in slow application response or even complete data loss.

Despite the complexities of IP routing behavior, network engineers need to be able to understand it to quickly troubleshoot and resolve application delivery issues. (Learn more about the importance of monitoring IP routing in our blog here.)

Limitations of traditional network monitoring tools
Most enterprise networks are highly dependent on SNMP for network performance monitoring. Network management tools that leverage SNMP are designed to poll network devices at set intervals and gather information on device health, up/down status, CPU and memory utilization, packet drops, traffic information, and more. But SNMP-based tools that poll every few minutes are not capable of capturing IP routing changes that can occur within milliseconds anywhere in the network or result in a high volume of network overhead.

Traditional tools also fall short when it comes to planning network changes. A majority of enterprise network change management tools are only focused on ensuring correct syntax or comparing configurations. They’re not able to understand the impact of a network change before the actual change has been made. In the world of IP routing, it’s possible to make the ‘right’ configuration changes on a device but still end up with ‘wrong’ routing behavior in the network.

Monitoring IP routing to the cloud with route analytics
Route analytics technology listens to BGP and IGP route advertisements exchanged between routers to build an always-up-to-date network topology map. The information in the routing updates also helps determine how traffic is being routed over the network in real time, even when the routing path changes within milliseconds. Additionally, route analytics allow the routing information captured to be stored. It can then be ‘rewound and played back’ by network engineers to understand how routing paths changed in the past. 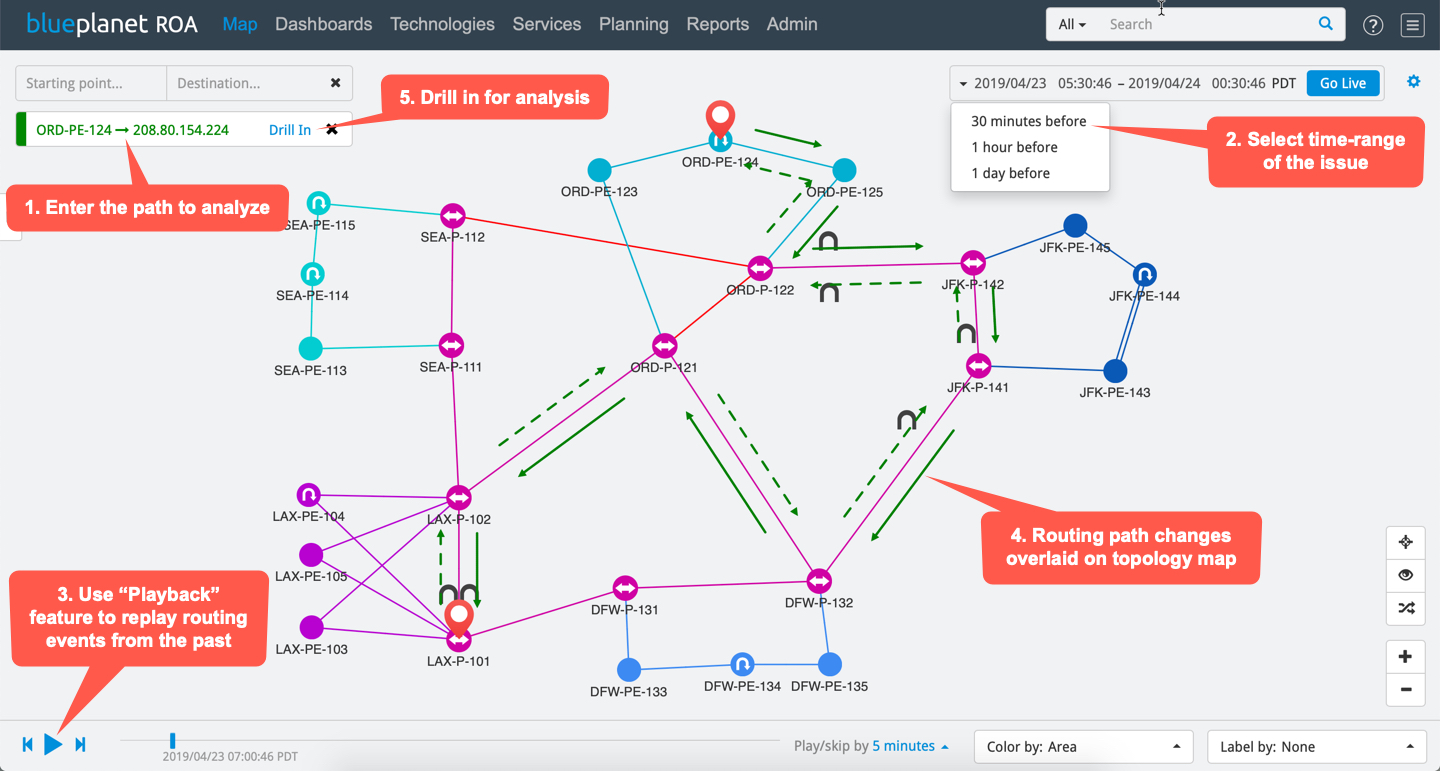 Route analytics, combined with traffic flow data, can help network engineers plan for network changes. By using route analytics as a network planning tool, network engineers can understand if the existing network can handle additional bandwidth load from cloud applications, if any congestion will occur, and the impact of a planned change on overall network performance.

Using “The 3 V’s of Automation” to maximize automation ROI

Our industry is still in the process of clearly defining what and where “the edge” is, w...