Blue Planet Route Optimization and Analysis (ROA) product’s Traffic Explorer® application provides real-time and historical views into traffic flows. In combination with ROA Route Explorer®, it delivers visibility into network-wide routing paths and traffic behavior. With Traffic Explorer, the world’s largest organizations can operate, troubleshoot, plan, and optimize their networks with unprecedented accuracy and speed. Network engineers, planners and operations teams are able to view complex IP/MPLS networks as integrated systems rather than collections of discrete devices and links, enabling them to maximize IT efficiency and productivity while reducing the capital and operational expenses required to maintain top network service quality. 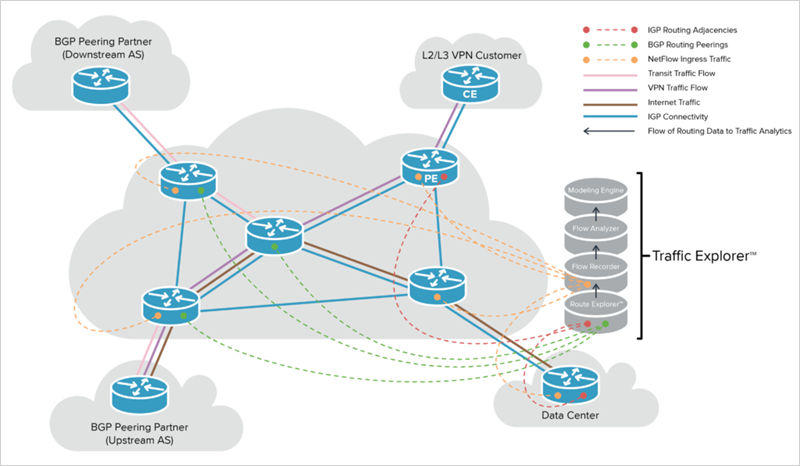 Traffic Explorer presents path-aware views into all traffic network-wide without having to deploy probes, and without the overhead associated with collecting flows at every interface or polling devices. Engineers are able to interact with an “as-running” model of the network, where actual traffic flow information is dynamically overlaid on a real-time Layer-3 topology map.

Root Cause Analysis
Since ROA Traffic Explorer knows the actual routed path through the network for every flow, operators can focus their attention on suspect devices or links to rapidly pinpoint the cause of poorly performing applications.

Unlike conventional traffic analysis tools, ROA Traffic Explorer reveals if hotspots are caused by new traffic loads or changes elsewhere in the network that caused traffic to be re-routed. The impact of every routing change or failure is reported by application, Class of Service, and traffic engineering tunnels, enabling engineers to prioritize their responses. As Traffic Explorer understands both internal (OSPF, IS-IS and EIGRP) routing as well as external BGP routing, it provides accurate insight into the causes of major fluctuations in Internet or other inter-AS traffic transiting the network core, helping engineers solve congestion and service degradation problems more quickly.

Engineers can simulate a broad range of network changes, such as adding or failing routers, interfaces and peering; adding or moving prefixes; adjusting IGP metrics, BGP configurations or link capacities; or simulating changes in traffic loads or new application deployments. During routine maintenance, engineers can know the impact on traffic of removing a link or router from service before taking any action, accurately predict the result of changes to router configurations, compare and document network conditions before and after implementing changes, and verify correct network operations after completing the maintenance activity, rather than relying on users’ complaints for the first indication of trouble.

Performance Optimization
Integrated views of network-wide routing and link utilization present a variety of options for problem resolution and performance optimization. Instead of being forced to take a link-centric approach to resolve congestion issues, engineers can, for example, model changes that re-route some traffic flows away from the congested link, often avoiding the time delay and cost involved in upgrading link capacity.

Similarly, they can engineer traffic paths to avoid performance problems or SLA violations during peak traffic loads. The ability to optimize globally across the entire network makes it possible to maximize network asset utilization and service availability, while reducing capital expenditures.

Problem Avoidance
Impact analyses show engineers how their network would respond in various situations. Simulating link or router failures and seeing the impact on network-wide traffic across all links is as easy as clicking on the interactive topology map.

Operators can not only confirm network redundancy, but also predict link loads under different, even cascading, failure scenarios. If backup routes are non-existent or not as desired, engineers can easily model changes to the routed network to maintain correct operation when things fail and ensure uninterrupted service delivery.

Capacity Planning
The ROA Traffic Explorer application provides the information needed to accurately predict and plan for future capacity needs across the entire network. Planners and engineers can view and analyze historical traffic trends by volume or utilization, including breakdowns by application, Class of Service, and traffic engineering tunnel on every link in the network, as well as by exit routers or next-hop Autonomous Systems.

They can then analyze and manipulate network-wide traffic matrices, showing traffic volumes between source/destination pairs, and input these matrices to perform “what-if” modeling and forecast traffic loads between end points. New applications can be simulated on the “as-running” network before they are deployed by adding anticipated traffic to existing traffic volumes and viewing the load impact on every link. Traffic projections can be calculated using a variety of models (e.g. linear, exponential) to best fit historical trends. Often, hot spots can be avoided by making routing changes without needing to upgrade bandwidth.

Peering Analysis & Modeling
Engineers are armed with a robust set of capabilities to monitor peering or transit traffic to ensure it is within contracted ranges, and can analyze, identify and justify new peering relationships. Whether moving traffic from paid transit to settlement-free peering, or balancing between multiple transit providers, Traffic Explorer provides the information network operators need to optimize peering traffic and maximize their bottom line.

Engineers can accurately model changes to the network to understand the impact on peering or transit traffic before implementing changes. BGP configurations can be modified to move traffic between existing and potential neighbor providers, showing how actual traffic loads would be affected. New peering relationships can be simulated, allowing operators to see the impact on traffic across their entire network. Since ROA Traffic Explorer understands full end-to-end routing (both IGP and BGP), service providers can even determine the impact on peering and transit traffic when making unrelated changes to their core network.